ZelenskiyNFT: is it a scam project created by the russians? We have the evidence. 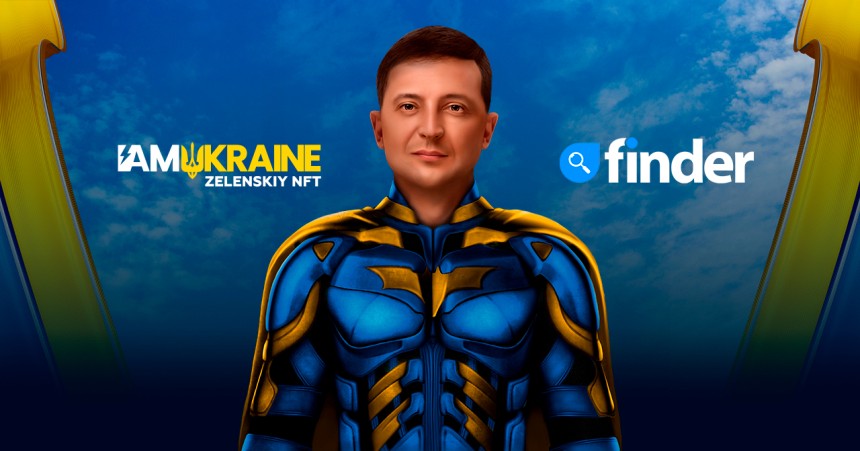 NFT platform ZelenskiyNFT created on Ethereum also uses the brand of President of Ukraine Volodymyr Zelenskiy. According to the publication, the project was founded in Prague.

According to Privacy, the site was developed by IamUkraine Studio. However, information about the existence of this company, in addition to articles (1, 2, 3, 4, 5) on the establishment of ZelenskiyNFT and the conclusion of partnerships with a number of (1, 2, 3) companies is not found.

At the same time, the company registered contract expired KYC check and audit.

👉 You can read the full text of the investigation at this link.

*The Investigation is done in Ukrainian, but you can write to us and after your request we will provide you with the english version of the file.

‍In the file, we published all available evidence and provided a step-by-step search algorithm. Next, we want to briefly introduce you to the main theses of the study.

Relations with the russia and belarus

During the investigation we established the identities of the project owners. They were Boyko Maksym Oleksandrovych, a native of Kaliningrad, and Dmytro Rantsevych, a native of Minsk. We also quickly came to a general conclusion about the activities of the founders – they choose popular topics, and based on them, try to make money by issuing and selling NFT. Project support ends as soon as the hype passes.

However, through ZelenskiyNFT, the owners not only wanted to "make money on the hype", they provided false information about where and how the money goes. From a legal point of view, this is a crime. From a moral point of view, in wartime it is a sabotage of the image of the country's leader.

In the interests of the tg-account of the project owner, there are a number of very dubious areas, such as "drugs", "covid dissent", "obscurantism" and others.

In addition, as will be noted in more detail below, the project team does not know the Ukrainian language at all. All announcements and texts on Twitter and Discord are made using an automatic translator. This can be understood by the large number of mistakes that occur during automatic translation, and which would not be made by a Ukrainian.

Another important point: Di & Lion (Telegram: @di_lion_nft) – one of the team members, at the site is listed as "Blockchain". Known Discord account named "Di (Username: ethsol#0129)". A search of the nickname "ethsol" found an account (id987435164) TG with the name "Z", which is a symbol of the russian invasion of Ukraine.

There were applications for automatic distribution of funds, and as a result, all funds go to 1 address. Money within the project transferred only to employees on freshly created wallets. Conclusion: the company is simply deceiving its customers.

In publications, the company uses the rhetoric of "good russians", as evidenced by the use of formulations such as "we are against adding fuel to the fire", as well as allegations that the company is "out of politics." This is impossible, because the basis of their activities (and even the name) is the personality of the political leader of the people of Ukraine – President Volodymyr Zelenskiy.

Texts (1, 2, 3) bloggers advertising NFT, written through copy + paste. In addition, the texts state that the developers are "close friends" of the blogger. It is a part of the text that needs to be spoken – in this way the company wants to give more weight to the words of influencers.

Despite many publications on cooperation with charitable foundations, the project does not cooperate with official authorities.

In TG and Discord publications in russian and English. Channel for communication in Ukrainian is called "Ukrainian channel", but the updates are still in russian. Posts in social networks in Ukrainian made (1, 2) using an automatic translator.

Avatars of the team members are not images created specifically by a designer or artist, but images taken with a free application ZEPETO. This indicates a superficial level of artistic preparation of the project.

All publications about the initiative (1, 2, 3, 4, 5) have signs of payment, as they contain the same text from the press release of the initiative, with the same comments from its representatives. Some resources posted the same release with a disclaimer that the material is paid for and is advertising, not full-fledged news.

Also in the release is noted that IamUkraine studio has a history of creating iconic digital art to support global initiatives. There is no other information about the origin of the studio or its previous projects on their website or in the media.

The link is in Terms are out of order, and the text itself matches the text in Terms of site looksrare.org. Also when searching for text from Terms – found sites dedicated to NFT.

With several thousand subscribers in TW and Inst publications are gaining dozens of likes. The previous TW account was banned. In early June 2022, the project's Instagram account with ~ 14k subscribers was deleted.

In the official chat TG users note the failure of sales.

The total number of visits to the site is 11k for the period from April to May 2022, with 68.6% of visits made direct transitions, and through organic search 7%, also 7% made visits from rarity.tools. 3% of visits from FB and itc.ua.

We also want to acquaint you with the information we received through intelligence. Under the guise of an investor, our employee asked questions to the company's contact person to get accurate answers to direct questions about investment security. We also wanted to find out whether the project really transferred money to charitable foundations.

First there was a short presentation, and then we asked to provide us with supporting documents – receipts of transactions on the transfer of money to charitable foundations. Instead of providing documents (they are not secret and can be provided publicly) – a company representative sent us to the clearview page, referring to the fact that this page automatically shows how much and to whom the money was transferred.

At the same time, we were not provided with any documents confirming the transactions even after a second request. And the clearwiew page itself is just text on the site, it has no legal confirmation.

Reaction to the investigation

After the publication of the investigation on the Ain.ua website, the editor-in-chief of the publication contacted us because of the message from representatives of the ZelenskiyNFT project. In this message, they allegedly denied their fraudulent activity.

The text of the message from the project representatives:

The article published by your media about our ZelenskiyNFT project is absurd, all the proceeds were transferred to funds in accordance with the declared distribution. If you are investigating, please take the time to pick up the phone and call the foundations our project works with before accusing anyone. And the fact that our team also includes russian guys who help to do charity work for Ukraine, so for obvious reasons no one wants to publish their data publicly, and you take and disclose their personal data – this is really an excess. We also made a ClearView system, where you can see the full movement of all tokens and contributions to funds, just including for such investigators as you: https://www.zelenskiynft.com/clearview/

Because of this, the Molfar team continued their investigation to gather more evidence.

The first thing we want to emphasize is that the ClearView page is just text on the site, which has no legal force. In addition, the page is designed in such a way as if it is constantly "loaded", due to which the data about the money transferred to the funds does not seem to be displayed.

‍Second, the contracts added to the ClearView page (Contracts V1 + V2 + V3) show purely transactions made to ZelenskiyNFT accounts. That is, these contracts serve as proof that they received money. There are no outgoing transactions to other accounts. Another suspicious fact is that most transactions have zero cost. Most likely, these were artificial transactions made in order to form contracts and thus “demonstrate the movement of funds”. But even this is carelessly done.

Thirdly, a journalist from The Record wrote to Tabletochki about cooperation with the company ZelenksiyNFT. And she received an answer: we do not officially cooperate with them, they do not even have the right to use our logo.

So, let's conclude once again: this is a fraudulent project that is trying to maintain its reputation by contesting the allegations. Because they get money from people. They have nothing to lose, so they decided to at least try to refute the accusations, continuing to make arguments that are supposed to mislead people.

And this is the classic style of the russians: fire at the Ukrainians, and then say that we didn't do it. It's the same here, only with extortion of money under the banner of a non-existent charity.

P.S. Mc.today editors, who previously advertised the ZelenskiyNFT project, reacted negatively to the publication. The project was also advertised by the ITC.ua media. The publications have already been deleted, so we added links to the cached versions. We understand that everyone makes mistakes and everyone can be deceived. But this is no reason to deny the facts.

P.P.S. The Record and Obozrevatel published good investigations on ZelenksiyNFT.