Terrorist attack in Vinnytsia: dance school as a strategic object 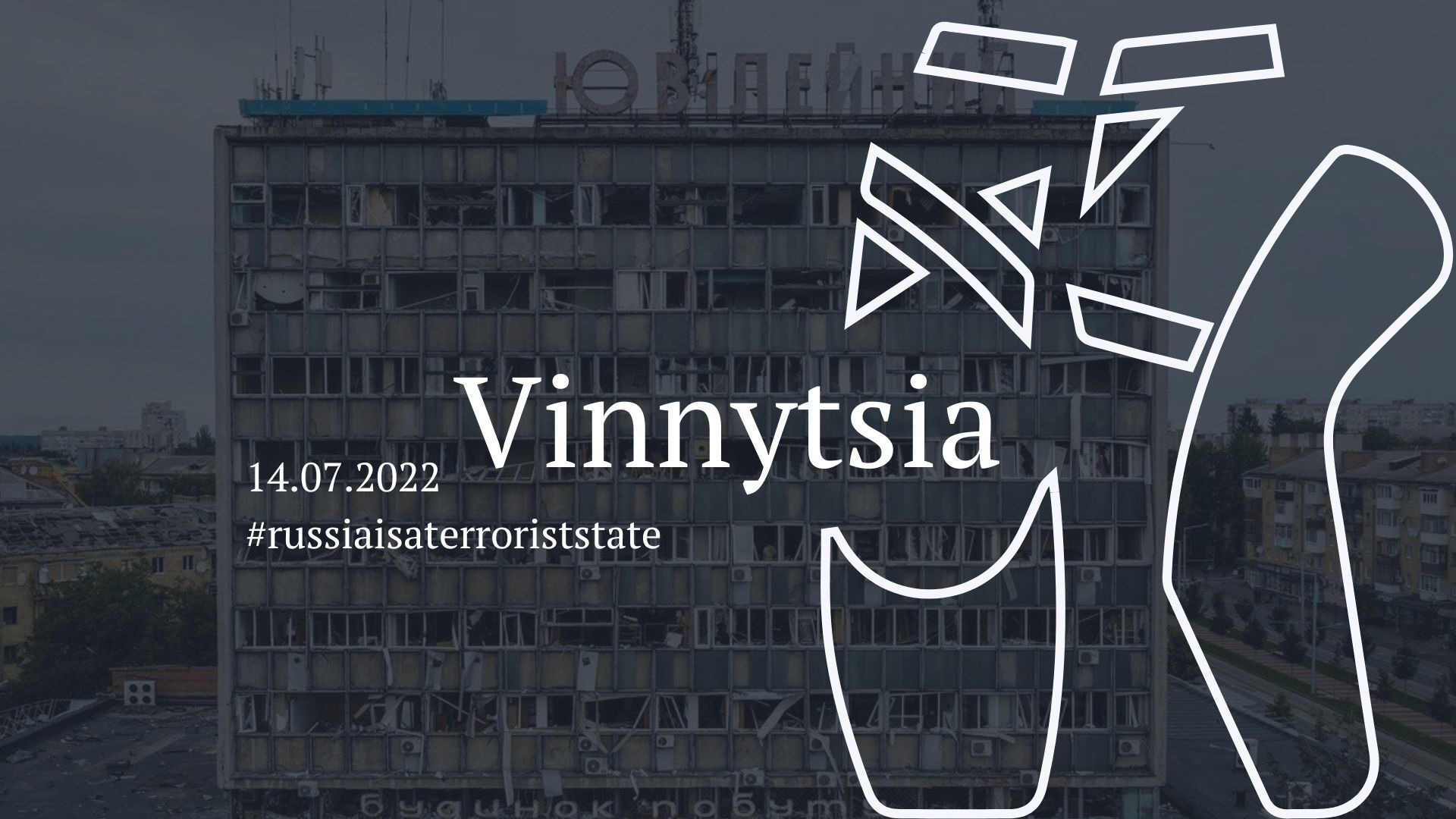 On July 14, at 10:45 a.m., Russian troops fired 4 Caliber 3M-14E missiles from Cape Fiolent, which is located on the territory of temporarily occupied Crimea. As of July 15, the number of civilian casualties is 197 injured and 24 dead, including three children, one more person is considered missing. The number of victims among the civilian population prompted us to investigate in more detail what was actually in the area where the shells hit and once again prove that the statements of Russian propagandists and the Ministry of Defense are complete lies.

On July 14, at 10:45 a.m., Russian troops fired 4 Caliber 3M-14E missiles. The rockets were launched from a small missile ship from the area of ​​Cape Fiolent, which is located in the temporarily occupied Crimea. Two missiles were shot down by Ukrainian Air Defense Forces – Serhiy Borzov, the head of Vinnytsia OVA, reported this. As of 12 o'clock on July 15, it is known about 197 wounded and 23 dead, including three children.

The total number of affected objects is 17, of which thirteen buildings have medium or small types of destruction: broken windows, panes, doors, damage to the facade, etc. Four buildings suffered the greatest destruction – most of them were hit by rockets.

None of the objects affected by the Russians had military significance and were used for military purposes!

On the building of the Officers' House were signs about the hero cities of Volnovakha, Mariupol, Chernihiv, Kharkiv, Mykolaiv, Kherson. According to the decision of the Vinnytsia Regional Council, the Officers' House building will have to be demolished due to significant damage. At 18:00 on July 14, a charity concert of the singer Roxolana was supposed to take place there, so part of the team that was on the territory of the officers' house was also injured: one person was seriously injured, another employee died in the hospital.

Since 2020, the reconstruction of the buildings is taking place on the territory of the Church of Gregory the Victorious. On July 14 at 10 o'clock (1, 2) the funeral of the deceased was held in the church. There were 10 people in the temple itself, 2 more women in the prosphora. The parish Sunday school building was completely destroyed.

In addition to the Officers' House, another rocket hit the Jubilee Household Building and Neuromed Diagnostic Center, which was located near the Household Building. Confirmation of a direct hit and the presence of victims can be seen on video in publications (1, 2). According to information from the Vinnytsia Regional Council, everyone who was in the clinic died. Subsequently, the Neuromed clinic confirmed the death of 3 people: an administrator, a manager and a boy who was at a reception at Neuromed; two more neurologists are in critical condition in hospital.

The windows of neighboring houses were broken. According to the mayor of Vinnytsia Serhiy Morgunov, in total were damaged 17 buildings

The photo shows a map with pictures taken after the explosions, on which single military personnel are circled in red, which is supposed to be proof of their presence "temporary point of placement of Nazis".

At 3:43 p.m. Solovyov duplicated the post (1, 2) about the fact that Ukrainian journalist Oleksandr Stoliarov (FB) demands explanations from the authorities and journalists, why they publish photos and videos of the consequences, and also claims that military personnel were stationed at the site of the shelling objects.

Solovyov, Simonyan, and "journalist" Oleksandr Stoliarov claim that the Officers' House is a military facility, and that at the time of the shelling it was home to "Nazis", and that the Officers' House housed a military center for recruitment, detention, deployment and training. At 12 o'clock on July 15, the Ministry of Defense of the Russian Federation announced (1, 2) that they destroyed the House of Air Force officers and foreign representatives-suppliers of weapons, who were holding a meeting on the supply of weapons, airplanes, and repair of the aviation park. At the same time, concerts were held in the Officers' House, one of which was to be held at 18:00 by the singer Roxolana. The singer reported that one person from her team is in serious condition in the hospital, and the sound engineer Yevhen Kovalenko died. Two more sound engineers who were preparing for Roxolana's performance were seriously injured, as written by the Hadyukin Brothers band.

At 5:00 p.m. Solovyov published a post denying the information about the shelling of the maternity hospital and the medical center and stated that they were destroyed due to the shock wave. At the same time, it is known that one of the rockets hit the Neuromed medical center and completely destroyed it. He also stated that the central part of the Officers' House was not destroyed, and that it was there that concerts were given, and military personnel were stationed in the side part.

At the same time, as can be seen in the photo from the scene, the main building of the Officer's House was also destroyed, but the front facade with the columns itself was not damaged.

In the same building, in the left side wing on the second floor, there was a dance hall of the Flow Place Studio. Video from the studio. On July 14, at 10 a.m., a stretching class was held in the studio:

According to information from the Instagram page of the studio, which was located in the Officers' House, it has been destroyed. Another studio across the street was seriously damaged. Fortunately, there were no casualties.

In the Officers' House, in the main building on the right side, there was a branch of PrivatBank, which on the day of the Russian missile attack worked as usual from 9 a.m. to 6 p.m. At that moment, there were people in PrivatBank, one of the employees died, 4 more employees of the bank were seriously injured and are in the hospital.

In the recording studio INACHE there was a sound engineer in the Officers' House, who was wounded, and the studio itself was destroyed. The studio worked as usual from 9 a.m. to 6 p.m. A car was also destroyed, which was located near the house in which the sound engineer was supposed to go with a charity concert to the front line of the Armed Forces of Ukraine.

One of the claims of Russian propaganda is that "there are many military personnel in the video and photo", which supposedly means that the object was military.

The presence of single soldiers in the photo in a country with declared martial law is not surprising, and if you consider that the Vinnytsia United City Military Commissariat is only 350 meters from the Officers' House, then such a large number of soldiers becomes even more obvious. According to the statement of the Vinnytsia Regional Council, 437 people were involved in the demolition of the rubbles, including:

If we look at the video from the scene of the events, we will see that the civilian population is much more than the military. Footage from the video that the President Zelenskiy posted in his telegram:

The video that Solovyov posted claimed that there are no civilians at the site and that the Officers' Building is a military facility. Red arrows mark the civilians who are helping to clear the rubbles:

There is also a video of the moment of the missile hit from surveillance cameras near the Officers' House, on which no military personnel can be seen, but only civilians calmly moving through the city center.

One of the volunteers arrived at the site to help clear the rubbles. He was in a camouflage uniform:

According to Solovyov's propagandist, rockets hit a military unit in Haysyn

At the same time, Solovyov posted a video from the center of the city, where a missile strike was made. The video captured the monument of the Air Force of Ukraine, located on Peremogy Square, 1 in Vinnytsia. The distance between Haysyn to the center of Vinnytsia is 82 km.

It is interesting that, in addition to the messages of propagandists on social networks, the Russian strikes on Vinnytsia were not covered in the Russian news as another "great victory", which additionally indicates the absence of any locations of the Ukrainian military in the places where the missiles were hit.